Northampton International Raceway, 30th May, was the venue for the first major championship of the 2015 season.

F1 – This turned out to be Tom’s best results on Tarmac so far this year, the gremlins he’s been having with the brakes certainly seem to be sorted so the practice session on the Wednesday prior.  The format for the night was to race in 3 heats out of 7, and those with the most points gridded at the front of the British Championship. Tom came home 2nd in 2 of his heats and a DNF in the 3rd heat after tangling with Stuart Smith Junior. This put him on 3rd row outside for the big one, he had a fantastic start and within a lap was into 2nd behind Lee Fairhurst and that’s how they remained til the chequered. 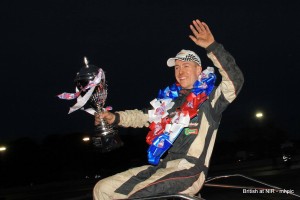 Mini – This was also the British Championship for the National  Ministox.  Catherine had 2 heats out of 3 to qualify in a good grid position for her championship. She had a terrible start to her qualifying heats, she got spun in her first heat and managed to claw her way back upto 12th, then suffered with a flat tyre within a lap of starting heat 2. This meant she started her British off the back so she had a mighty job on her hands, but she took it with gusto and with no stoppage she managed to get into 9th place. A fantastic achievement.