It’s been a while since I’ve had time to update my site and what an action packed few weeks its been. Firstly we lost another Sprint Car driver a veteran of the sport who I was lucky enough to see race in Knoxville just a few weeks ago. Greg Hodnett 27 died after crashing into the wall at BAPS motor speedway.RIP Greg

I didn’t get the best of starts in the Shootout at Belle Vue. I was out of luck there and just one of those meetings. I was planning to get some more seat time in the US in my Sprintcars but with work commitments it kept me in the UK.

So where shall we start??!!  The Skegness World Final was on us, this is Brisca F1’s biggest race of the year and promoted very well at Skegness this year by Rob and Asha Speak who did a great job. I enjoyed the track walk and got the chance to pose for some pictures and sign some autographs great meeting the fans that queued to see me!!! It was a nice addition to the proceedings allowing the fans the chance to walk the track. There was also some great support races from the action packed 2l Saloons. I came out on track to the fireworks an introduction to the 7000 strong crowd. As normal a few cheers and a few boos…… standard 🙂 . I was row 2 behind Stuart, I got a great start nipping up the inside into the lead from the green flag straight past Dan Johnson Stuart and Lee, I was leading down the back straight until I got a big hit from Lee Fairhurst 217 squared me up taking me to the armco into turns 3 and 4. Luckily I kept the car on four wheels after I rode the fence showering the track in sparks, giving the fans some early race WF action. I powered out of it and dropped into 5th loosing a bit of time straight behind Frankie 515. The move on me definately  jeopardised Lee’s race, meaning he would get a DNF. The quickest World Final completed in history with no  stoppages some good racing I came home in 5th place.  Well done to Stuart Smith 390 on his second world final win, it seems he drove a faultless race. The rest of the meeting was ok a few places here and there 3rd in the Final so after a trip to the bar we loaded up and set off to get in the shale shifter ready for the European at the Northampton Shaleway. 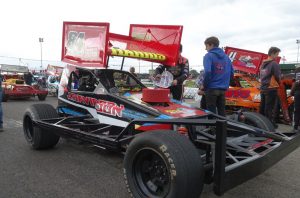 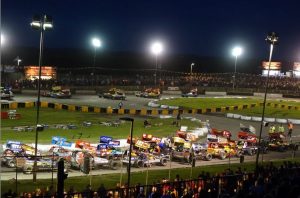 Sunday was an early one getting to the track from Skegness. I was a few rows back for the big race rescheduled from the monsoon meeting we had in July. The race and track was good the track was getting better each race and was bedded down well. I got to the front in the European after trading some blows with Dan Johnson and managed to time a well timed hit perfectly on Stuart driving off the car and onto the win. Tom Harris European Champion 2018. Stuart came home second with some damage but finished 2nd, will Hunter 3rd in his THM prepared car. 4th in the final wasn’t too bad either. 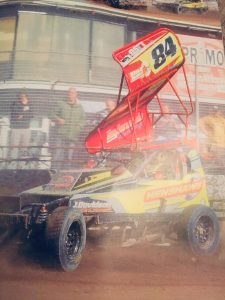 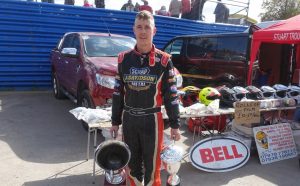 Kings Lynn was a great meeting for me won both my heats and the final , my second final on the trot here. The car was mint and track dry and smooth, the other races both won by Jake Harrhy 345 with two great drives from the front. Started the National with a handicap got some good points jumping to 3rd in the Shootout with a good points haul. 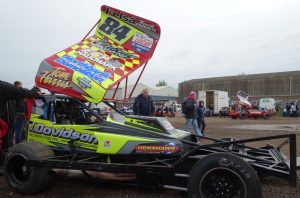 Next stop was yesterday, at Buxton some hard fast racing from lots of the drivers, especially the Shootout lads. Catherine was also racing her V8 from Red Top and scored some points yet again doing us all proud. A great weekend for THM cars Tom Spencer in the V8’s winning both the V8 finals Saturday night at Birmingham and Sunday at Buxton, In the F1 final Will Hunter 220 won with his THM tarmac car. I did okay in my heat getting 2nd behind Frankie and scoring 10 points in the Shootout. The final was fast and I had some good speed with the 84 chequered roof on display. I ended up getting a DNF in the final after some very hard & very fast racing. We worked hard to fix the damage but unfortunately they shut the gate on me in the Grand National missing out on some more valuable points. A few more rounds to go now with the top 5 drivers all fairly close with only about 50 points between us all. I’m hoping to be racing in the USA in the next few weeks which will mean I’m likely to miss some of the remaining S/O rounds but we will see what the next few weeks brings. Oh………. and Luke 464 made the trip to Venray on Sunday and won the final there !!! Well done LD!!  Great results for THM cars in the past few weeks!! I’ve been supporting the “Lets Fence Cancer” Charity Calendar too, as you can see its promoted on my aerofoil make sure you grab yourselves a copy for a fantastic cause. Please go and see one of the girls at the track !!! See you all soon!!!  Tom 84 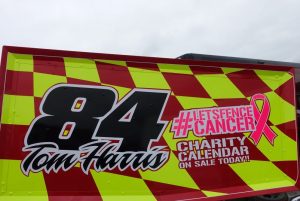 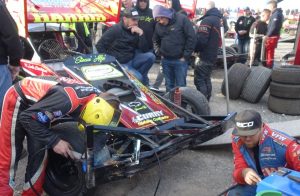 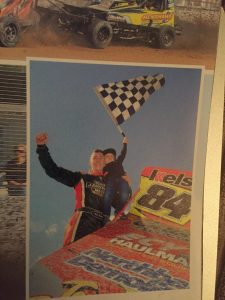 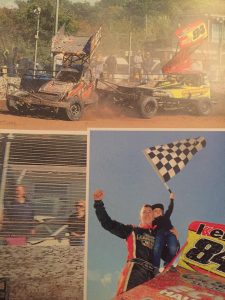