I had done a fair bit of travelling and it was time to now get to Holland for the F1 World Cup at Venray. I had only just got back from America and I was still buzzing from racing the Knoxville Nationals ! Unfortunately although I made it back, one of my bags did not and I found out on arrival my bag with my race suit, helmet , Hans device and TH merchandise was in New York having its own party in JFK Airport!!! Thankfully it arrived just in time before team Davidson set off!! The weather was hot and I’ll skim over Saturday, as it wasn’t a great night as far as I’m concerned ( a second,a couple of 6th places) I was struggling with an oil leak and although we normally go well at Venray. We later found out oil was leaking onto my rear tyre making it not much fun time to drive. However the other side of the garage, Luke was driving really well winning his heat and Final with a second place also putting him on the front row for Sunday’s big race! The final placing helped me and got me a bit further up Sundays grid but I was to start on row 7 so 14th on the grid for the World Cup. 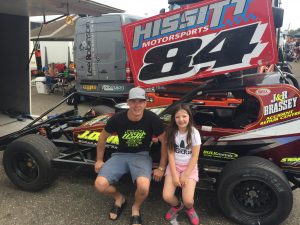 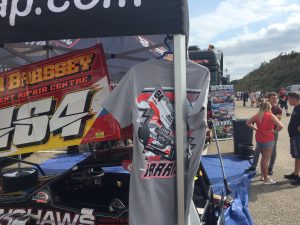 Sunday was another hot day, there was a good following here, lots of fans over from the UK!! Here I am with Phil’s (A&G Brands) daughter, Poppy who had come over to watch the racing, My new sprint car merchandise was on display too and is doing well we are seeing a few t-shirts and hoodies around the raceways 🙂 Check out my twitter for the competition to win some TH merchandise!

The Parade lap for the World cup was fun. I had Jack Witts getting some practice in, driving me round was cool now that he can reach the pedals :-0 already one of the youngest gold top winners in the Mini Stox he will be one to watch in F1 Stock Cars. The green flag dropped, however we had a full restart I think I got a couple of hits in though, so we climbed out refueled the car and checked it over. At the restart I got a good start, I  made my way through the traffic LD had settled in behind the leader and was going well. I just keep the car going made some places up and ended up following Luke home for 3rd . Not bad from 14th . Both JD cars on the podium behind Dutch winner 400 Roy Maessen. 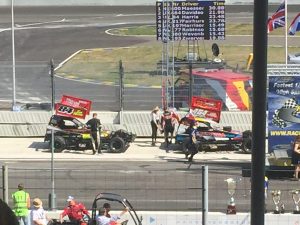 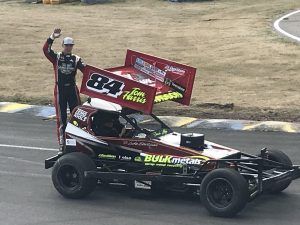 Luke continued his form winning the Final on Sunday too!!!! Great weekend for Team Davidson 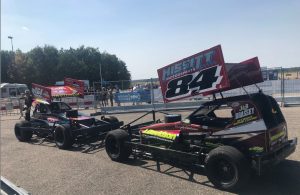 Bank Holiday Monday we were back at my local track Belle Vue. An overcast day a bit damp but first round of the Shoot Out. I didn’t start racing until May but scored enough points to get in the top 12 not bad going. Luke has made it too . I was in heat one the shootout lads at the back. First few laps were good getting to battle with Dan Johnson and Stuart Smith. I Finish 5th. The final was same again get a few hits and make some places up but get a rear puncture and have to pull onto the centre green. The Grand National the car was flying I was eager to get a win here this time, I get hit by one of the Wainman’s puncturing my tyre again. Next Shootout at Kings Lynn always go well there, so claw some points back and see what we can do!! 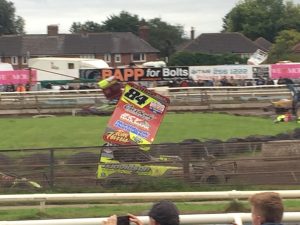 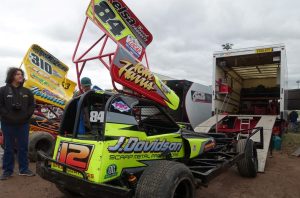