Tom is off to USA for Indiana Sprint Week 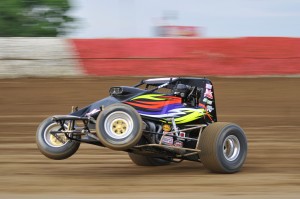 Leading British stock car driver Tom Harris will make his race debut in Sprint Cars, the US’ most prestigious short oval category this summer. Harris, 26, from Banbury, Oxfordshire, has purchased a front running Bob East chassis to tackle three events (Gas City, Jul 10th, Kokomo Jul 11th and Lawrenceburg Jul 12th) in the USAC Sprint Week in the Amsoil National Sprint Championship before returning in late July/August to compete in a further six events. The switch to US racing follows Harris’ successful debut in the lower Midget category in January and marks the first time in the modern era that a British driver has entered the Sprint Car category that regularly sees top drivers from NASCAR and Indycars.

“We talked at the start of the year about making the switch to racing in the US as the best way to progress my career. We’ve won pretty much everything we can here in the UK and had to stop talking about and just do it,” says Harris. “This is a major commitment from Tom Harris Motorsport and my supporters including J Davidson, Neil Stuchbury Motors R&C Metals, Carbody, PRG Utilities, Elan PR and Lucas Oils to make this happen. After working well with Bob East at the Chili Bowl, it was the right move to continue that relationship and we will run the car with a British crew from his workshop. There is a lot to learn but with Bob guiding us, we will get to grips with it quickly.”

Harris will return to the UK during the summer to qualify for the BriSCA F1 stock car World Final and will continue to support his UK customers but ultimately sees a brighter future in the US. “From the test in late 2014 and then the Chili Bowl, we’ve seen the huge opportunities available to forge a professional career in the US,” adds Harris. “We’ve reached the limit in what we can do build-wise with the cars in UK and we have won nearly every title as a driver or constructor. Now we move on and take on the best the rest of the world has to offer.”