It was a hot one at Skegness ready for the UK Speed weekend. It was a bumper crowd and Luke and I were there looking forward to some good results. Luke won a couple of races at Skegness back in May so lets see what we can do this weekend for Team Davidson. I had just booked in to race the Knoxville Nationals too in my winged sprint car in August  so I’m now really looking forward to fulfilling a childhood dream to race against the best racers in the US! 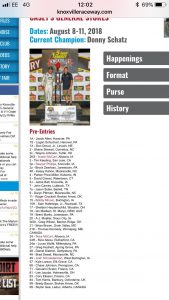 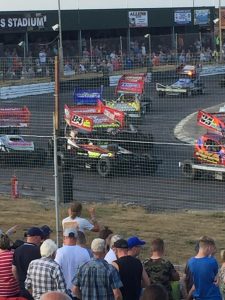 Luke and I were in heat 2. Just before I went on the track, I had to congratulate Will Hunter and check out his THM car with a convincing win for him in heat 1. Will is starting to get to grips with the new car I built him a few weeks back. My heat was ok,the car was getting there and nothing to report much as I followed LD across the line in 6th and into the final. Nigel Green was fast though and he would be one to watch and race with over the weekend. There were big gaps in between the races with us being support which gave us plenty of time to enjoy the sun and play with the set up and watch the football on the truck! The car was going well in the final and I was passing cars moving up the field until I went past Ashley England 346 who had other ideas putting me into the turn 4 fence puncturing my right front tyre. I made it to the centre green and watched the race from there. Grand National next for me it was getting late and wanted to get in the bar! No wins 12th in the national but again Will Hunter coming 2nd in the THM car! 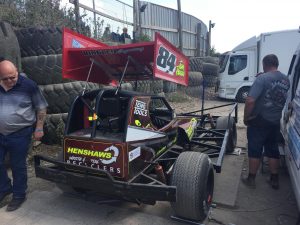 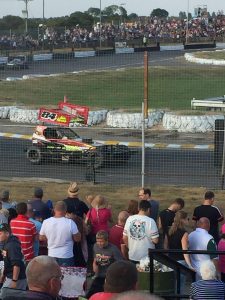 Sunday I was in heat 1. I managed to get a 3rd place. The car was going well and straight into the final. Again would be about a 4 hour wait till my next race as it was the Saloon UK Open and F2 Open so watched those with plenty of action from all the drivers giving the crowd a good show. The Final was good, I made some good early ground and was racing well with Nigel Green for a few laps, enjoyed watching my old tarmac car also go well in front of me too with young Kyle Gray 124 coming 3rd. A 4th for me  in the Grand National rounded off a few more points scored this weekend. With our semi finals being announced does anyone know anyone with a private plane or an offer to fly me back for my semi final from Knoxville???, C’mon Lewis Hamilton, can i borrow your plane?? 🙂