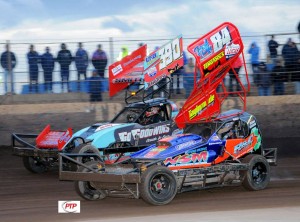 The newly sign written shale car made it’s first appearance at Kings Lynn on 25th April. Tom had a great meeting, finished 5th in his heat, was winning the final by a good margin when the waved yellows were brought out, Stuart Smith Jnr was lined up behind him on the restart and he took his opportunity and gave Tom a good feel of his front bumper (!), causing enough damage for Tom to have to pull off. The final few laps of that final were epic though, the lead changed hands every lap and Stuart eventually came home the victor. There were some manic repairs in the pits to get Tom back out on track for the Grand National, he just made it and rewarded everyone’s efforts with a fantastic win. 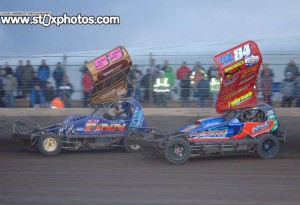 Catherine was also racing her mini at Kings Lynn, she finished 8th in her first heat, having to come back from 2 half spins, unfortunately the heavens opened for her 2nd heat and with no shale guard on her car soon started to suffer with a misfire leaving her out of the top 10. She came back fighting in the final though coming home an excellent 3rd. 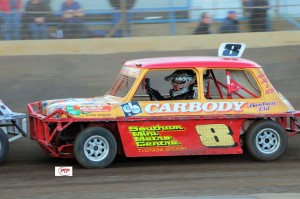