Ipswich & Venray F1 & Catherine in her V8 at Northampton

To start my report I want to mention some sad news that filtered through to me Sunday whilst in Holland and it just puts into perspective how precious life is. Jason Johnson 41 one of the top World of Outlaw drivers was tragically killed in his feature race at the Beaver Dam Raceway in the USA. I had the privilege of meeting and racing against Jason at the Chili Bowl in 2017 when he drove for Clauson Marshall for the late Brian Clauson, in his dream team. We all do racing because its our passion and we all know the risks when we strap ourselves into these rockets accept the risks, but something like this makes us all think! The social media feeds are flooded with kind messages and memories of Jason with many posting  their thoughts and best wishes for those he left behind, of course his wife and young lad. RIP Jason Johnson 41 “The Ragin Cajun” 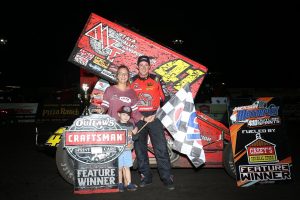 So Ipswich  Luke and I set off for the once year trip to Ipswich. I always seem to go well here its a big fast track and THM cars are well suited to the track here. Luke was in heat 1 and drove well in a fast race to  finishing 10th. I was in heat two and three and struggled with the brakes to be honest and finished 3rd in both races. The final was mega I got tangled up early and was flying when the gearbox went with a lap to go nursing the car over the line for 4th. Luke finished 3rd and was well pleased with podium. Now was time to get the gearbox changed in time for the Grand National which we managed Luke won and I came Third again so Three 3rd places and a changed gearbox!! Last WQ for me not sure I’ll make my semi due to US commitments but will be well placed to race and win it if I do!!! 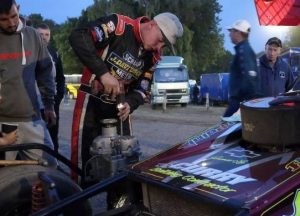 Sunday we had caught the ferry over myself Luke and Lee Fairhurst 217 were racing from the UK always good here . It was all in this weekend and i was going well until I was in the wrong place at the wrong time having a fast hard roll over . Out came the yellows and i watched the rest of the race from the stands. Lee Fairhurst won heat 1 whilst Luke came home in 3rd. In heat two I got a great start the car was flying and the brakes were good and ended up winning Heat 2 with Lee Fairhurst in 2nd and Luke finishing 7th. 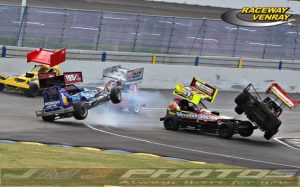 Heat 3 I finished in 7th and Luke 4th. The final was better I finished 3rd so a podium place with Lee Fairhurst and Luke coming home 4th and 5th. All in all a good weekend of results and looking forward to the World Cup in August in Venray.

Catherine was at the Northampton Shaleway, mixed reviews by drivers and fans alike online but it was a dust ball from what I’m told and i believe it got better as the meeting continued. We will see how it is for the F1 European mid July. FairPlay for Deane for giving it a change. Anyhow, Catherine got 9th in her heat and didn’t place in any other races. The V8 committee deciding to cancel the European race due to the track conditions!!!

Results marred though by the tragic news though as mentioned of a fellow competitor on the US racing scene !! RIP Jason Johnson 41 ” Ragin Cajun”.

See you at the tracks Tom