Tom and Catherine both raced at Coventry on Saturday and Belle Vue, in Manchester, on Monday.
Tom’s weekend started off well with some more tweaks to the new suspension proving to be worthwhile, the car was flying at Coventry and he finished his heat in 4th place. Out for the final and once again he was gaining places and found himself up into the top 3 when a race stoppage was called. On the restart he got put into the fence hard and the resulting damage meant he had to pull up so a DNF. There were manic repairs to the car in the pits to get him back out on track for the GN, and although the car was by no means perfect he was advancing through the field well until he was put into the fence again and so the night ended with another DNF. 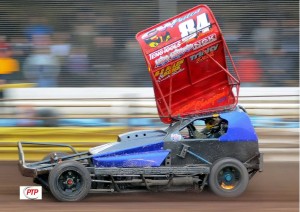 Catherine fared much better than her older brother and as this was her first meeting from ‘superstar’ she had some fantastic results. Out in heat 2, first race from her new grade and she finished on the podium, an excellent 3rd place! She placed 6th in her second heat and then after a fantastic final, the minis putting on an excellent show, she came home 5th. 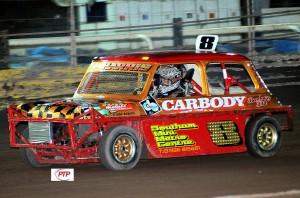 Tom had a far better meeting at Belle Vue on Monday, the repairs to the car on the Sunday had got it handling better and he had a good day’s racing, 3rd in his heat, 4th in the final and finished the day with 3rd in the GN.
Catherine had another good day on the shale, 2nd in her first heat, unfortunately she got spun in her second heat and finished outside the top 10 but then the final was a brilliant race with Catherine, Jessica Smith and Frankie JJ having some fine battles throughout, Catherine managed to clinch 3rd place.

Overall a good weekends racing, onto Skegness this Thursday for Catherine and then they will both be at Stoke this Saturday 11th April.