I finished Will Hunters car off Saturday night and was in the pits bright and early so I could take it for a few laps, the aerofoil came loose in practice so we sorted that and were parked up next to them in the pits ready for a days racing. Made a change it being hot and sunny you never know at Buxton! Will (220) got a 10th putting hm straight into the final, Catherine was there today too for her British after some good results at Skegness last week, she’s now moved up and racing from Blue grade! 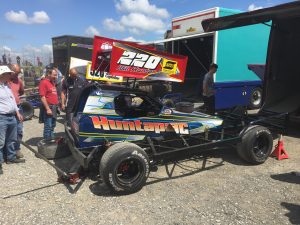 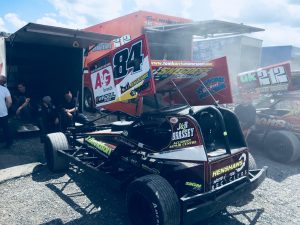 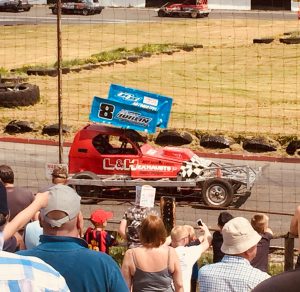 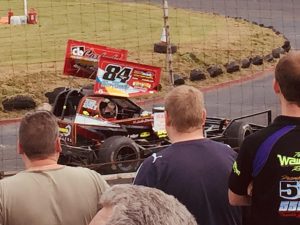 Catherine was out first, the V8’s go well at Buxton and she had a good race taking a few big hits into the bends finishing 7th. I was out in Heat 1 for the F1’s too, having some speed but the car wasn’t turning in too well so ended up with a DNF pulling off and needing to race in the Consolation.

Catherine had a great race in heat 2 coming home third behind a flying Sophie Maynard (154). I went out in the consolation and made some good ground early on cruising home for the win which is always good in front of a good crowd and going into the final. 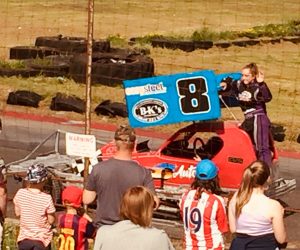 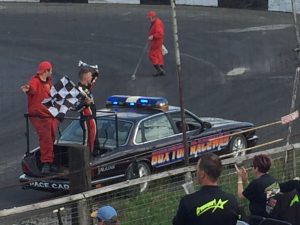 Catherine was on row 3 for her British alongside Kev Stuchbury (131), a few of the F1 lads were driving the V8 drivers round on their parade laps, myself with Catherine and Nigel Green for Sophie Maynard. Again some hard hits were going in and Catherine is driving really well and doing us all proud every meeting, managing to come home in 7th in her big race!

Final time – Always hectic at Buxton but had some good hits and the car was quick we had some clean racing for good few laps, car was going well until coming down the start finish straight I got tangled up and the car spun 360 and was stopped on the racing line with a back rear puncture! I managed to fire it up and get out of the way before getting collected  and into the infield. A hectic National saw me finish 5th scoring a few WQ points before i fly out to America tomorrow (Tuesday) to race with the guys out there!! I will keep you updated on here and twitter how I get on and will be back for the F1 Scottish Weekend where we always go well!!! Well done to the ladies too some great drives in F1 by Jaqueline Ellis (219) Sophie Maynard in the V8’s with a few second places and of course Catherine mixing it with the lads in V8’s!!