Been a full on week as I had just got back from some good seat time racing with the USAC lads in America. Cowdenbeath a very unforgiving track very fast and if I do say so myself a track I go pretty  well at!! Two times Scottish Champion, could I make it Three!!! We set off for the drive to Cowdenbeath its not as far for me now! We are working hard on some new Tarmac cars but I’m racing Lukes car from last year which has seen me right so far this year and we seem to have got some good speed especially last time out at Buxton so lets give it a go. I’ve been Scottish champion since 2014 I’ve crossed the line 1st in the last 4 finals in Scotland and got disqualified in Lochgelly in 2014 (I won’t speak about that 🙂

I was in heat 2 and a great crowd at Cowdenbeath again thanks to all the supporters who come and see us race. I got off to a great start, making up a good few places and using the bumper to good affect cruising to a quick win!! Luke was in heat 1 and had a great drive too coming home in 3rd. I watched the Consolation and saw a great win for THM client Craig Utley in the 484 car. The Scottish Championship was on us, I started at the back and there were lots of cars in the wall at various times, someone commented that I was the only driver not to touch it all weekend, I’ll take that!! Again the car was really fast and I could see I was catching 451, the flying white top, Martin Spiers in a new self built car. Another lap and I would of had him……pretty sure, but fair play and a white top winner! a second place on the podium for me with Lee fairhurst 217 in third! Last race of the day the Grand National, yet again I made up good ground missing others in the wall and cruised to another win topped off a good meeting! Some good points again, as I’ve said before need to score as many as i can when I’m here to compensate on the schedule whilst I’m not here and racing in USA! So two wins and a 2nd in the Scottish Championship, that will do!!  but I would of been happier with the win!!! Ended up having a few drinks in the bar with some fella called Nigel Harrhy!! 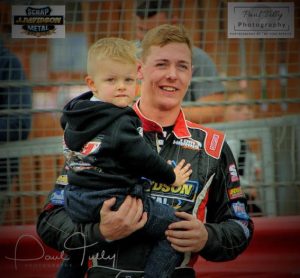 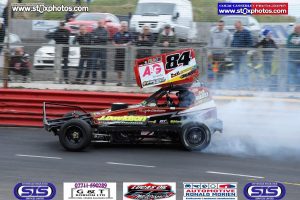 So Sunday morning came, what can we do at Lochgelly??, a smaller track but wide bends and we set the car up to go well here and boy did it go!!! I was in heat 1 and the car was fast and so was I, taking an easy win with Craig Utley in his THM car following me home in 2nd!  Luke Davidson grabbed a 4th in his heat and both of us through to the final! Quick mention to Jacklyn Ellis, 219 too another win after her Buxton win and will be creeping up the grades! Final time – I felt good and confident we could win this one, we had some good racing with most of the drivers passing most of them clean. Afterwards comments  from other drivers and fans about how fast we were all weekend so will take that! Great win in the final with 37 Chris Cowley and 518 Stu Shevill completing the podium! 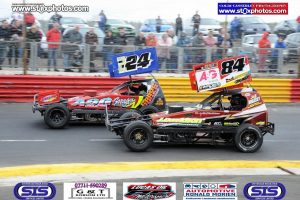 Started with the handicap in the National finishing outside the top 10. Heat and Final double some silverware to take home and more points scored!!  To top it off we found out Robert Ballou who we know well and helps us with our racing in the US won the feature at BAPS Motorspeedway in Pennsylvania in his Jamie Davidson sponsored race car!!! 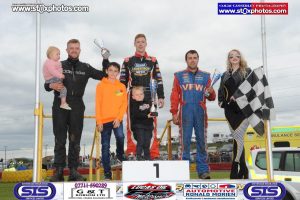 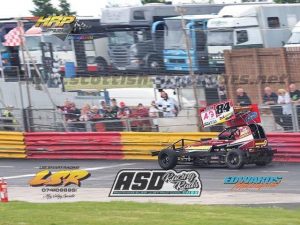 Great weekend please can we race there every year??!!!

Onto Ipswich this weekend another fast track and then onto the Northampton Shaley Sunday!! It will be F1’s first time round there since its resurface !!!

See you at the Tracks