By Tom Harris 29th May 2018 Uncategorised No Comments
0

I booked in fairly last minute to Belle Vue and glad I did. Another hot sunny day and a good crowd at Belle Vue today. I was in heat 2 and didn’t get the result needed with a dnf so i went into the consolation. I was in the Consi with Frankie (515) & Dan Johnson (4) . The car was good and i was able to make good early ground and get to the front quickly winning the Consolation. We went back and made a few weeks to the car to make it even quicker and in the final I dialled it in and won The Mike Parker memorial with Paul Hines (259) and Lee Fairhurst(217) third. Lap handicap in the Grand National and an early yellow flag meant I was in the mix early on, with a load of good battles and lots of action going on coming home 3rd and scoring some good points. I’m looking to score as many points as I can as I’ll be America soon and also for most of July racing there!! 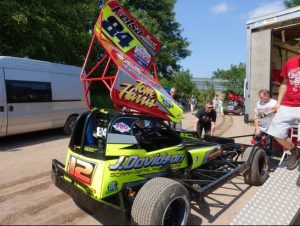 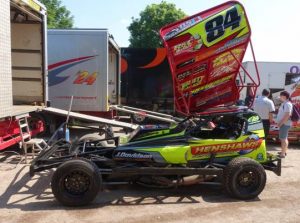 Catherine was at Skegness for the National Pairs with the V8 Hotstox. She was teamed up with  Tom Spencer and they had a great weekend.

Catherine got 5th heat 2 and 2nd in the Final on Sunday night scoring some really good points. Monday was some brutal racing the V8 drivers putting on a great show, whilst I was at Belle Vue.  Catherine scored some great points again including 5th in the final and a great 2nd in the grand national. 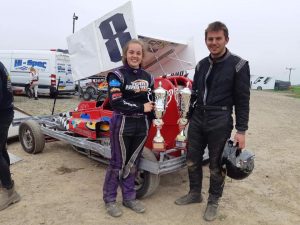