A mad week so bit late on the meeting report, we had a weekend off this week from F1’s so been working hard.  I was hoping to be racing in America this week but my new engine and wing is still not ready for the Sprintcar so spent the weekend watching the V8’s. Catherine had not much luck at Stoke unfortunately no finishes, but England won so I was happy about that!!  Sunday on the tarmac at Buxton she scored some more great points from Blue grade. Catherine managed to bring the 8 car back 6th in heat 1 , 3rd in heat 2, 8th in the Buxton Cup and a 9th in the national finishing the day off and completing all the races she was in on a hot fast Buxton track!! 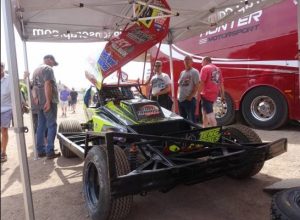 So Belle Vue last week, The British. It wasn’t a great meeting to be honest for me it was a hot dry dusty day and the British is always a tough one as you have to do well in the 3 heats to grid up for the big race. Last year at Sheffield I was leading and got put away so was keen to see what we could do this year. I was in heat 2 and the car felt good I went well here last month so was up for it. I had a good race with Dan Johnson and Matt Newson coming home 2nd so not a bad start at all. Heat 4 was next for me, again Matt Newson was flying taking his second win, I grabbed a 7th but the car didn’t feel right so we needed to go back and play with the set up due to track watering . Heat 6 was a good race to start with, I was having a good battle with Stuart Smith  and was running in 4th when a couple of crashed cars popped out the fence as I was going round the bend, causing front and back axle damage!! 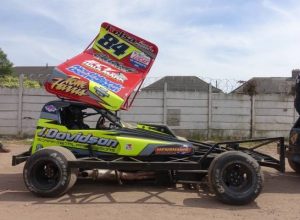 Back to the pits and all hands on deck to fix the car! we changed the axles and was fired up ready to go, as I reversed realised there was a loud knocking the rear axle had different brackets on and the propshaft was knocking so we made a few adjustments drove to the track gate and was locked out! Obviously wasn’t best pleased, the crowd were fired up though and some boo’s and cheers echoed from the stands. It wasn’t nice to here but is what it is.  All of us drivers spend a lot of money and time putting a show on for the fans but you can’t please everyone and every driver has its fans and “haters”.  Anyhow that was that, we loaded up and watched the British. I would of been row 4 or 5 after the days points and who knows maybe I could of given Stuart a run for his money but well done to Stuart Smith 390 ….. 2018 British Champion! I thought I may of had some seat time in USA but onto Skegness at the weekend back on the tarmac for the Speedweekend!!!

See you at the Track