Boyhood dream has come true. I’m lined up at the “Super Bowl of American Sprint Car Racing” The 58th Knoxville Nationals in my own winged sprinter. The J Davidson owned car is about to do its first few laps of the biggest dirt oval in the world!

Lets go back a few days !!  I managed to qualify for the Brisca World Final in my semi final at Kings Lynn coming home second behind Stuart Smith. Second row now for the World Final in September will be an interesting race Ive been there before in 2012 but will treat it as any other race! Now time to get a flight to the US. 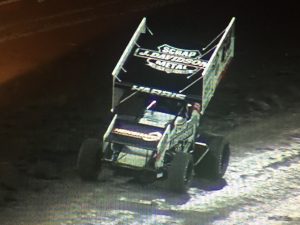 We arrived the track and got some laps in, the car felt good and I was super excited come Friday night. I went out for my hot laps, aware there were some people following me or even watching back home via “Watch The Cushion” who were doing pay per view coverage of each nights racing. All I can say is these boys make this look easy, I don’t mind saying, its the hardest thing I’ve ever done but what a rush 110mph sideways inches away from other cars and the cushion . The visibility in these cars takes some getting use too the size of the wings and the space I look through was strange to start with, but soon got used to it. I went out for my hot laps and got a ok run in at 16.4 seconds. Some of the top lads and ladies are low 15 seconds but ill take that. I went in the B Main 2, Kerry and Ian Madsen a couple of rows ahead. I was starting at the back, that I’m used too, but was great getting the laps in and just being a part of the event was a massive achievement. There was a Speed Sport Challenge race next this was for the overseas entrants racing against the Aussies and New Zealand drivers. A parade introduction in front of the main stand was pretty cool. After about half way I caused a caution my engine was running sick so I got pushed onto the infield. The team checked the car quickly under caution and I rejoined the field. Some great words from the commentators saying how I was getting faster every lap and how as the first race driver from the UK how well I was doing and what an effort it was from the team racing there. I can’t thank Jamie Davidson enough for this opportunity and I hope I did everyone involved proud. My social media has been full of positive comments from fellow drivers and fans, both from the UK, Holland & USA.

Saturday Night was the big show!! The 58th Knoxville Nationals. Again I was in the D Main and managed to get some great laps in in front of the bumper Knoxville crowd. The Nationals going to Brad Sweet winning $150,000 a close finish between second place man Donny Schatz. I can’t explain what it felt like, to be involved and be racing at this level . Now I’m racing with some of the best Indycar, Nascar and full-time Sprintcar drivers in the world. The drivers, fans and people at home that support me and make this possible.  I’ve for sure been able to fulfill a boyhood dream and hopefully one for Jamie too, running in his own Sprint Car in the Knoxville Nationals. I’m now having to seriously think about and consider dedicating all my time to racing in the US, a massive commitment but I need to give it serious thought.

Sunday morning we drove 4 hours from Knoxville to Bob East’s place where my non winged car is kept. I would be racing with the USAC boys before I flew home. Had a great night being 4th fastest and finishing 4th in my heat and qualifying straight in the A Main. Had a good start but again got some fast laps in coming home mid pack in 14th place!!! Gold Cup this weekend. In yet another country and racing the F1 Stockcar in Holland !!! Lets see what we can do at Venray! 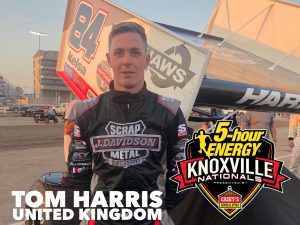 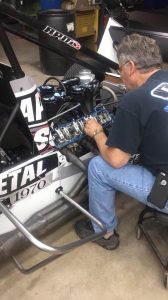 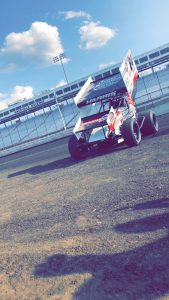